The Ultimate Guide to Phygital NFTs

Home » Sponsored Content » Arcadians Avatar NFTs: The Future Stars of the Arcade of the Metaverse

Arcadians Avatar NFTs: The Future Stars of the Arcade of the Metaverse

By TheoOctober 7, 2021Updated:October 15, 20216 Mins Read
Contents hide
1 What is the Arcadians NFT Project?
2 Getting to know the project’s Roadmap
3 Can the Arcadians NFT collection be trusted?
4 NFT Community & Future Partnerships
5 More About OPGames

On October 12, OPGames is launching the Arcadians NFT Project. The 10,000 Arcadians Avatars are the future stars of the “Arcade of the Metaverse” the Blockchain Game Company is building. Basically, the NFTs come with in-game utility and play-to-earn mechanics. Thus, they fall somewhere in between a gaming and collectible project. Actually, this may prove a lethal combination, given the recent commercial success of these two industries.

What is the Arcadians NFT Project?

As the name implies, the 10,000 Avatar NFTs draw elements from arcade games.  Each Arcadian is programmatically generated from a pool of traits resulting in countless combinations. The arcade element is not just for aesthetics. Rather, it is the foundation of the utility of the NFTs. According to the website, Arcadians are “Game Legos”. Basically, they mean Arcadians are the perfect building blocks to create a game.

We can compare the project to the Loot NFTs that spread like wildfire last month. The mint event was a massive success; all loot bags were swept away. Then, an organic explosion of derivative and utility projects ensued around the NFTs. The NFT Project has a lifetime tradeable volume of close to $250 Million as of press time.

In the same vein, this Arcadians NFT drop is actually the Genesis Collection of the OPGames Metaverse. Essentially, Arcadians Avatars double as Web 3.0 legos. By that, they mean Arcadians are essentially small pieces of code that developers can build upon. Actually, this is why OP games call Arcadians “game lego”! Hopefully, the community will see the utility in this project and we will soon see plenty of developments from outside of their team.

Getting to know the project’s Roadmap

Clearly, the team is leveraging on NFT Gaming. Following this strategy, all proceeds from the Arcadians NFT sale go back to its creators. These include different game developers, DAO’s and open-source game engines that will help build the open metaverse. According to the team, “the project is about giving wings to game creators and game creators, providing these people to reap the benefits of their creativity and efforts.”

Additionally, their vision for growth includes drawing in new projects and integrating with existing ones. For example, projects that have their custom Arcadians confirmed include; NFT Dungeon (created by Sam Ellis, one of the artists behind Adventure Time and Archer) and Moonshot Bots. Clearly, the Arcadians NFT collection aim to be in the NFT scene long-term.

So, how does the project stand out?

There is yet to be a successful metaverse arcade on the blockchain. Knowing this, the team drew inspiration from platforms like Kongregate or New Grounds. Actually, both are earlier versions of something similar. The team stated they “want to model it similar to what they [Kongregate] did wherein we have creators, partner developers, and the community to really co-create with each other.” However, the Arcadians NFT project aims to be bigger and better, hoping to support those same creators.

Can the Arcadians NFT collection be trusted?

Although this seems like an ambitious goal, the company has a great track record. Fortunately, they also have funding to turn this exciting vision into reality.

To clarify, a legitimate gaming company with a full, experienced and professional team are behind the Arcadians NFT collection. Moreover, the project has significant backing from a couple of Venture Funds. An impressive feat considering its yet to launch!

To address the NFT sceptics, the team is entirely non-anonymous, reachable and accountable. Since recent rugpulls in the NFT collectible world, we always advise caution with new projects. However, their act of self-doxxing reflects the team’s level of commitment. Not only that, their intention to create long-term value and utility is very clear. A clear roadmap, solid partnerships and project transparency all help an NFT project survive. Actually, the Arcadians NFT collection has all three.

With five days to go before the drop, the excitement on the project’s Discord and Twitter account are palpable.

The community is undoubtedly happy that the team was able to secure a partnership with Jake Foushee, the voice of Optimus Prime. This exciting partnership just confirms their expertise in ’80s and the ’90s arcade game nostalgia.

Furthermore, the team announced a collaboration with Josh Blaylock, a writer for several comics and studios. In fact, his traditional portfolio includes Transformers and Devil’s Due Comics. Although he’s notable for many reasons, in the NFT world he’s famous for Punks Comics.  Now, he will realease a Multiverse comic with Arcadians at the end of this year. 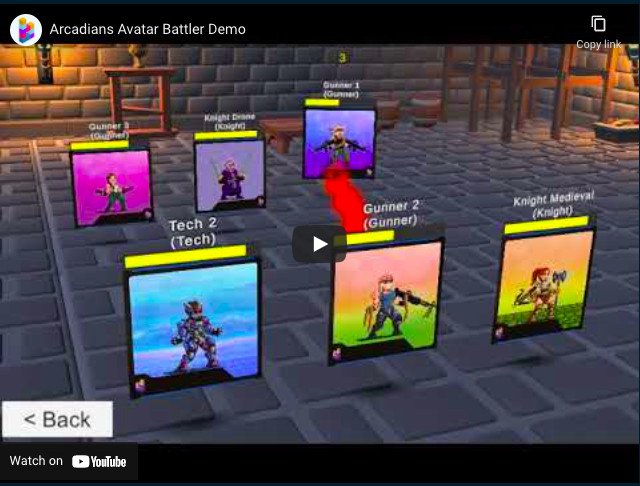 After the launch on October 12, the team plans to immediately release an open-source avatar battler game. Credit: Arcadians

Based on the project’s roadmap, NFT holders have lots of development updates to look forward to. After release, the team will roll out an open-source avatar battler game.  Apparently, this game will allow Arcadians to battle against other avatar style fighting NFTs.  Meanwhile, their partners will develop a trio of new Arcadian games.

By Q1 2022, the project will go all-out with the retro arcade element. To clarify, the Arcadians NFTs will have breeding and combat mechanics. This will all be included via a play-to-earn game on a layer 2 blockchain. According to their blog post, “the full vision for Arcadians doesn’t stop here — this project will span years as the team works towards building the arcade of the metaverse.”

OP Games enables developers and the community to own, run, and monetize games as a collective. Through OP Games’ suite of tools, developers can turn entire HTML5 games into fractionalized NFTs. Then, offer them to the public as investable assets. Founded in 2018 by gaming veterans, OP Games seeks to lower the barrier of game asset ownership.

Recently, the OPGames studio also raised $8.6 Million to help developers bridge skills to web 3.0. This is just one of their many milestones on the roadmap.

Despite the success of Axie Infinity, we haven’t seen the best of the play-to-earn model. We are looking forward to seeing how the Arcadians NFT collection progresses under OPGames.  Obviously, only time can tell how the drop will go. However, owning an Arcadian that will represent you in the OP Metaverse could put you right in the middle of the action. In the current market, that’s exactly where you want to be.

You can learn more about the Arcadians NFT project via their official channels: