Over the course of 2021, we have seen an explosion in use cases for non-fungible tokens. One of the biggest potential game-changers has been NFT ticket sales, and now NFT Ticket Explorer is tracking the trend.

Created by Get Protocol, a digital ticketing platform specialising in NFT tickets, NFT Ticket Explorer is a pretty simple idea. The platform shows users the price paid for each NFT ticket, along with its lifespan. This includes the number of times a ticket has changed hands, through resale or trade, when it is validated, and when the holder claimed any associated collectible.

For those staring blankly at the screen, NFT tickets have the potential to include exclusive collectible content. If that sounds like reason enough for bands, DJs, promoters, and venues to start using non-fungible tokens for entry to events keep reading, because that barely scratches the surface.

A digital collectible can come in almost as many forms as real-world memorabilia. Ultimately, it’s only really limited when it comes to physical senses. So things that work with touch, taste, and smell aren’t possible within an NFT itself. Yet. However, it’s more than feasible to include IRL rewards in an NFT ticket. Think about how artists like Rammstein’s Till Lindemann have offered fans the chance to have dinner with him as part of a collectibles series. Then let your imagination go wild. 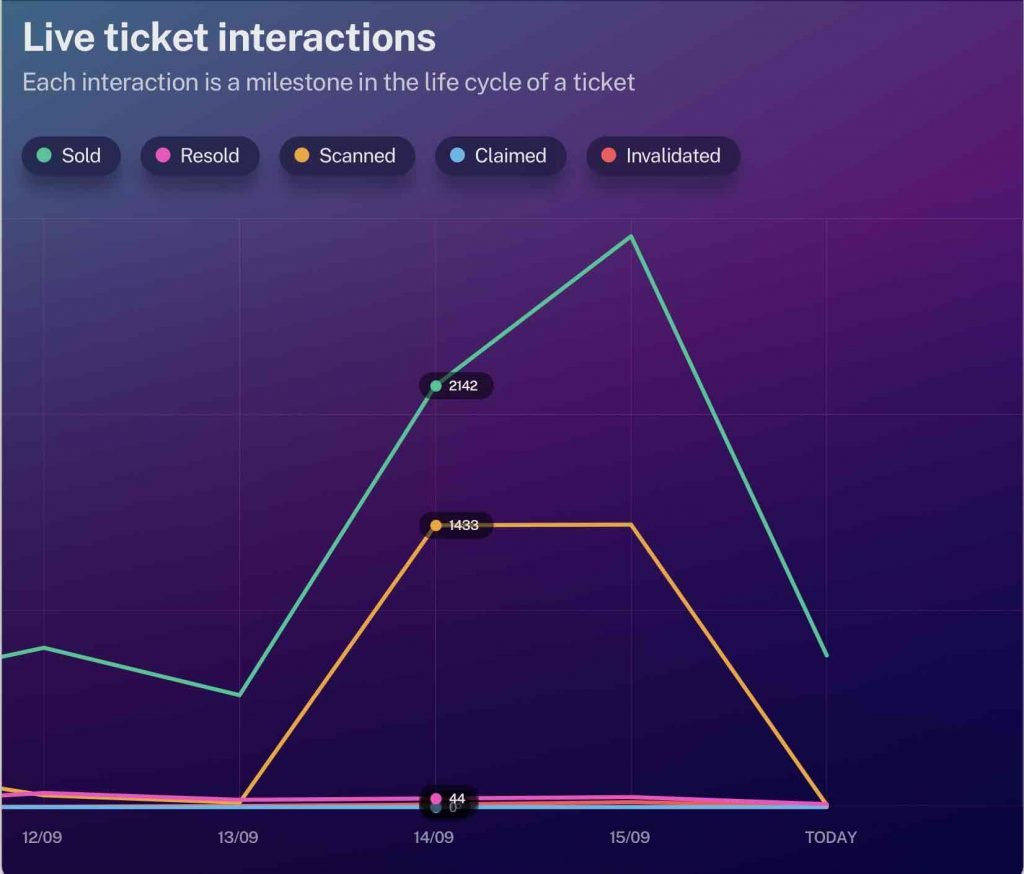 NFT ticket technology appeals to the live music industry for more reasons than giving fans exclusive things. It can eliminate duplicate and fraudulent tickets. Simply put, non-fungible tokens cannot be replicated or tampered with, so protect against unsavoury fakes.

This also can extend to the secondary market. Touts, and ticket resale companies, have caused such huge problems by exponentially inflating the price of tickets. It’s such a big issue the UK government, among others, have been talking about an outright ban of such platforms.

Thanks to smart contracts, it’s possible to limit the price of resold tickets. You could also stop this from happening altogether. Furthermore, it’s easy to ensure resales trigger payments to artists and promoters. Traditionally, neither receive much from resales.

Ultimately, an NFT ticket is really all about visibility. In short, you can see every exchange, data set, movement, and use that linked to that ticket. Plus, you can see who has interacted with it in any way, when, where, and why. This is where NFT Ticket Explorer really comes into its own.

From an industry perspective, it’s a research essential. Bascially, managers, marketing teams, record labels, and musicians can use this platform to understand what is and isn’t working within the emerging market. There are also several new additions to the functionality in the works. One of which is pre-financing for future events. This will allow users to offer NFT tickets as investment opportunities in order to get funding off the ground.

Of course, we have really just focused on music examples in the context of NFT ticketing. It’s important to understand NFT tickets can be used for anything that requires entry. Nevertheless, with major projects from music stars like Don Diablo, Kings of Leon, deadmau5, and Babymetal arriving in the last few weeks alone, it’s clear that the future is looking very non-fungible for all things audible.