What Is Binemon And Could It Be The Next P2E Success Story?

1. Collectible Sales: Volume Traded Over the Last 7 Days for Art Blocks, CryptoPunks, BAYC and more! (As of September 20, 2021) 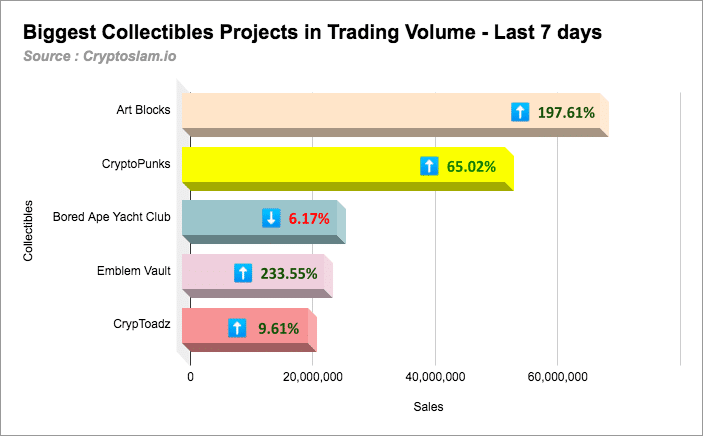 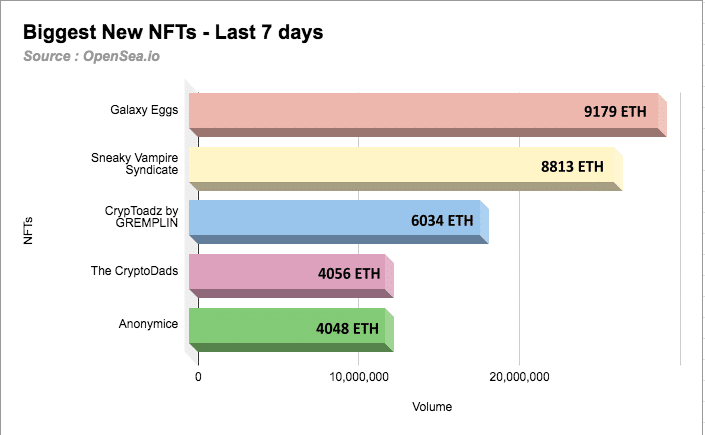 ? What is it? A Collection of 9,999 Metaverse Galaxy Eggs made by Art Director and Artist Gal Barkan. This is the first project of (art)ificial, an art studio exploring technology and art’s boundaries. Barkan has been creating futuristic and sci-fi art for the past 20 years. This collection is the culmination of a lifetime of work on one hand, and the beginning of a new chapter in taking part in the creation of the metaverse.

✅ Since the launch last September 14, the lifetime tradeable volume has climbed to over 9179 ETH or close to $30 Million. Meanwhile, the start price was only 0.085 ETH but the floor price is now pegged to 1 ETH or around $3,000. The art is being hailed by the NFT Community as “timeless masterpieces” and praised for its top-tier quality. A “Legendary Egg” sold for as much as 40 ETH or $1.2 Million during the first day of trading, signifying an upward trajectory.

?‍♀️ What is it? Digital artist Migwashere, the resident Bored Ape Yacht Club artist, is behind the Sneaky Vampire Syndicate. Described as “8,888 Sneaky Vampires living their best life in the syndicate.” The team promises to airdrop companion bats, release merch and much more. In fact, they have a solid roadmap and 41,000 members in their discord already (at the time of writing). The Collection leverages the aggressive growth of the NFT Market and the wildly successful BAYC.

✅ The public minting event started after the pre-sale for .08 ETH or around $243. As of press time, the price floor has climbed to 2.47 ETH or almost $7500. Everyone wants a piece of the Bored Ape Yacht club, and for those who missed out on the original drop, Sneaky Vampire Syndicate is their best chance to get a piece of the pie.

? What is it? Gremplin, the artist behind the iconic art of Nouns DAO, released CrypToadz — a series of 6,969 toad-themed collectibles.

✅ The new collectible kid on the block is CrypToadz. At 6034 ETH, over $18M, in weekly trading volume, the project has quickly vaulted to the third spot on OpenSea despite launching just last week. CrypToadz is the brainchild of the artist Gremplin, who worked on the art for the daily generating Nouns NFT project. As people who previously used CryptoPunks as their Twitter avatar start switching to Toadz, it’s clear the project has struck a chord among NFT OGs because of the referential nature of the art.

?‍♂️ What is it? CryptoDads is 10,000 randomly generated & unique art pieces carefully chosen by some of the greatest dads themselves. Each dad found themselves in the midst of a midlife crisis and fell into the dark abyss of shit coins and expensive jpegs of rocks. Some made it out with diamonds, and others never recovered.

✅ Basically, the Collection has merch, booze partnerships, a possible show and a game; that’s why the NFT Community recognizes the long-haul potential in it. Moreover, the project has donated $30K to a charity supporting men’s health. The project has been a major success and the community has grown with it, highlighted by the CryptoDads Discord, which currently has more than 53,000 members.

?‍♂️ What is it? Onchain generative collection of 10,000 NFTs with free-to-claim DeFi Mechanics. The team is following an unconventional and innovative method in the launch. They explained the reason behind it through a tweet. “One thing I wanted to do with our launch is make it as fair distribution as possible. I get so annoyed by DeFi projects that reserve 25% for “founders” and 10% for “marketing.” Satoshi didn’t reserve 25% of the supply for himself.” It seems like the team is set on breaking the norms as they openly stated that they don’t have a website, just a smart contract.

✅ The approach of the NFT project is resonating with the NFT Community. The price to mint was only .03 ETH but as of press time, floor price has climbed to 3.4 ETH or almost $10,000. The onchain nature of the NFT project is a big plus because it means that it does not require independent hosting or anything that could lead to the NFT disappearing at any time. The aesthetics are very cyberpunk-esque, especially with the pixelation.

3. More Collectibles News: Galaxy Eggs, CryptoPunks and CyberKongz mooning at 100ETH Floor Price, Christie’s No Time Like Present Auction, Claylings Sells out in 9 Seconds and Mastercard is getting into NFTs! 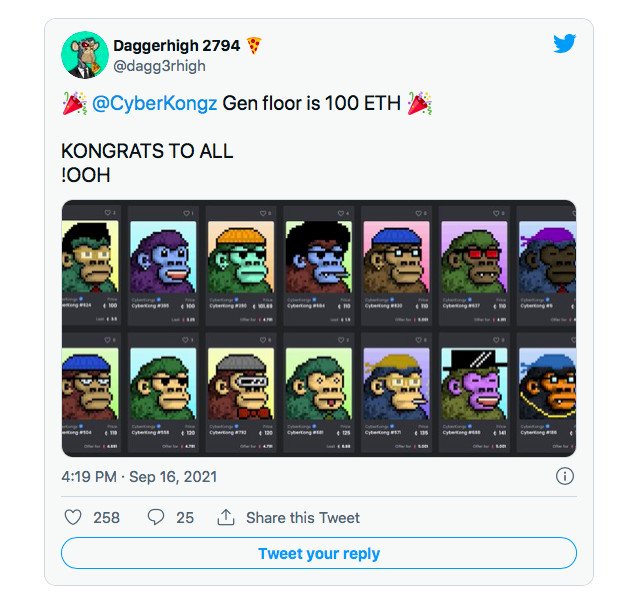 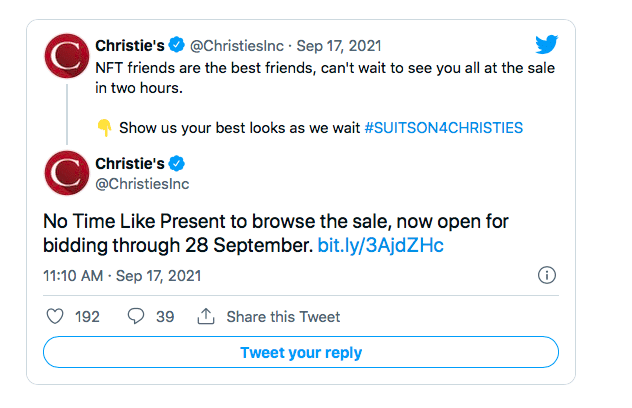 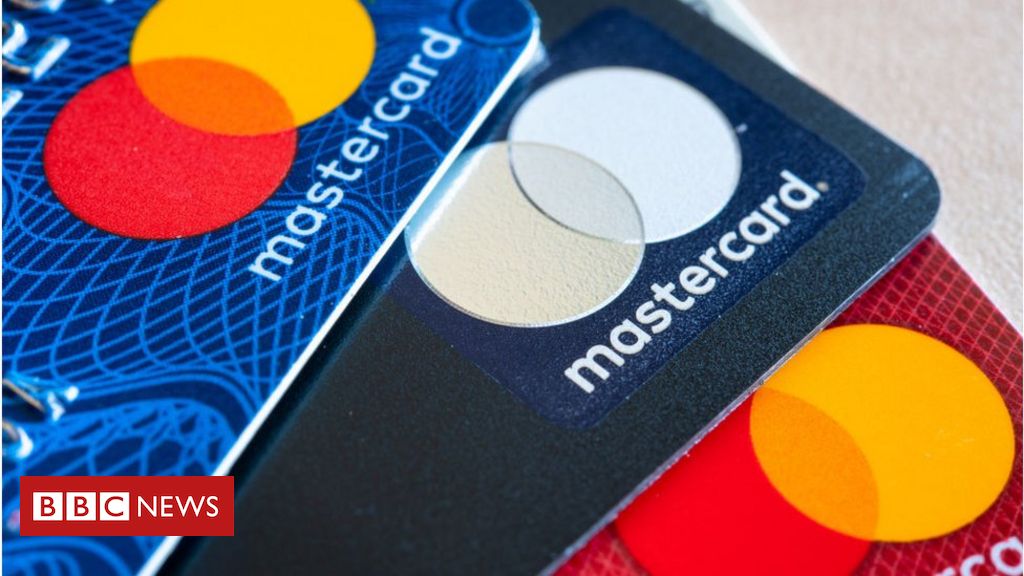 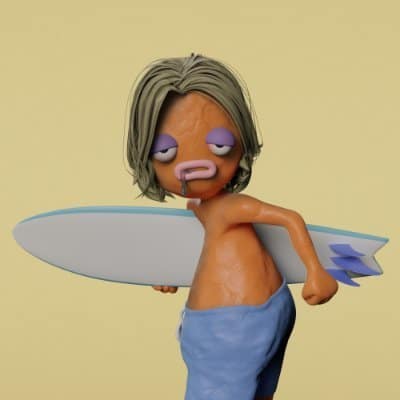