Most Expensive NFT Art Ever Sold

While non-fungible tokens, or NFTs, have been around since about 2017, they caught mainstream attention only in 2021. Since early last year, NFTs have been surging in popularity, and have made their way across industries. Some of the most expensive NFTs have even sold for millions of dollars. The highest sold NFT alone fetched over $90 million.

In fact, according to a report, total NFT sales hit $17.6 billion in 2021—over 21,000% growth compared to 2020. This isn’t really surprising given the hype and utility surrounding some of the top NFTs. This year, NFTs continue to gain prominence, despite a recent lull in sales.

The Top 10 Most Expensive NFTs Ever Sold

As more and more artists, celebrities, and brands drop their NFTs, let’s take a look at some of the most expensive NFTs ever sold.

1. The Merge by Pak – The most expensive NFT in history

Acclaimed anonymous NFT artist, Pak’s ‘The Merge’ takes the crown as the highest sold NFT. On December 2, 2021, Pak created history by selling his artwork for a whopping $91.8 million. Actually, unlike most of the highest value NFTs, The Merge is not owned by a single collector. As a matter of fact, 28,893 collectors bought 312,686 masses (or units) of the Merge artwork. And each unit cost $575.

Dropped on the NFT marketplace, Nifty Gateway, The Merge is a “single artwork distributed across many tokens, not a collection of artworks”. In other words, it is an open edition artwork where users could buy tokens (masses or m tokens). Here’s where things get interesting. Each token serves as a unit of mass and any two tokens in a wallet merge to become one.

Therefore, the total number of NFTs can change based on the number of collectors. And theoretically, the Merge could eventually become a 1/1 NFT.

Digital artist Michael Winkelmann, aka Beeple, had long held the record for the most expensive NFT. His artwork, Everydays: The First 5000 Days was auctioned at Christie’s for $69 million in March 2021. Interestingly, the initial bid was just $100. However, due to Beeple’s popularity in the crypto and art space, the bids skyrocketed in no time.

The artwork is a collage of Beeple’s 5,000 artworks that he created every day, starting in 2007. Thus, it comes as no surprise that an artwork that took 13 years to make, fetched such a hefty sum. A year since the auction, Everydays continues to be the most expensive NFT sold to a single collector.

Clock was created by Pak in collaboration with WikiLeaks founder, Julian Assange. The crypto art features a timer counting the number of days Assange has been imprisoned. Every day, the timer updates itself to reflect how long Assange has been in prison. Eventually, in February 2022, AssangeDAO, consisting of over 10,000 Assange supporters, bought the NFT for $52.7 million.

The duo created the NFT to raise funds for the WikiLeaks founder’s legal defence. Assange was imprisoned by the US government in May 2019 on charges of espionage. Following the highly controversial case, he is currently imprisoned at London’s Belmarsh Prison, awaiting extradition to the US. Furthermore, AssangeDAO will donate all funds to the Wau Holland Foundation, a nonprofit that is taking donations for Assange’s legal defence.

4. Human One – The second most expensive NFT by Beeple

It sure seems like Beeple and Pak are battling for top spots on the list of highest sold NFTs! Fourth on the list is Human One, a stunning kinetic video sculpture that combines both physical and digital technology. In his own words, Beeple called the piece, “the first portrait of a human born in the metaverse.”

The over 7-foot-high sculpture features a person clad in silver garb and what looks like a space helmet. A dystopian setting of changing landscapes, projected on four walls, forms its background. Christie’s auctioned the NFT for nearly $29 million in November 2021.

As one of the first-ever NFT projects in existence, several CryptoPunks have sold for jaw-dropping prices. Of this, CryptoPunk #5822 takes the top spot. It features a blue-skinned Alien, one of the only nine Alien Punks ever made. Deepak.eth, the CEO of blockchain-based technology company Chain, bought this rare NFT for around $23 million in February this year.

Founded by software company, Larva Labs, CryptoPunks is a collection of 10,000 uniquely generated avatars. These were launched in 2017 on the Ethereum blockchain and were free for anyone with an ETH wallet to claim. Today, however, they are one of the most iconic and highly sought-after NFT projects in the market.

Another alien CryptoPunk is the sixth most expensive NFT ever sold. Auction house Sotheby’s auctioned CryptoPunk #7523 in June 2021 as part of its iconic digital auction, Natively Digital: A Curated NFT Sale. It fetched $11.75 million—the highest for any CryptoPunk at the time.

As the only Alien Punk with a medical mask, it is one of the rarest CryptoPunks in existence. It also features a rare knitted cap and an earring.

Next on the list is TPunk #3442, which Tron CEO, Justin Sun bought for 120 million TRX or about $10.5 million (at the time) in August 2021. The NFT in question is popularly known as “Joker” due to its resemblance to the Batman villain. It is a part of the Tpunks collection, a CryptoPunk derivative project with 10,000 NFTs.

Originally, these copycat NFTs cost 1,000 TRX or $123 each to mint. However, Sun’s purchase shot up the value of TPunks, with many collectors rushing to buy the NFTs. Indeed, TPunk #3442 was the most expensive NFT sold on the Tron blockchain.

Well, the CryptoPunks have done it again! CryptoPunk #4156 is the eighth highest sold NFT. Unlike the CryptoPunks above, #4156 is an Ape type—that too, one of the only 24. Because of its rarity, this CryptoPunk has been sold several times, fetching $10.26 million in its last sale in December. Actually, just 10 months before that, it sold for $1.25 million!

Recently, in February 2022, another ape type CryptoPunk made it to the highest sold NFTs list. CryptoPunk #5577 sold for a whopping $7.7 million, making it the fourth most expensive CryptoPunk in the market. Many believe that Robert Leshner, the founder of Compound DeFi protocol, bought the NFT.

The rare NFT has a single attribute, which in itself is rare as only 2% of Punks have this. Besides, it adorns a Cowboy Hat, a trait shared by 1% of Punks.

The title of the fifth most expensive CryptoPunk NFT goes to CryptoPunk #3100. Another Alien Punk, it sold for $7.67 million about a year ago. Actually, that was the first time this particular Punk was listed for sale since it was minted in 2017. As a rare Alien Punk, it was quickly sold for a hefty sum.

Currently, its owner has listed it for sale for $106.43 million. While over a hundred million dollars might be a bit farfetched, the Punk may very well sell for an amount much higher than its last sale. To its credit, it also features a rare headband (only 406 Punks have this) and a single attribute.

CryptoPunk #7804 is again a rare Alien Punk, sold for $7.57 million. Actually, it sold just a day before #3100 and was the most expensive Punk at the time. However, unlike the other Alien Punks on this list, #7804 spots a number of attributes.

Firstly, it is the only Alien Punk with a Pipe. A Pipe in itself is a rare attribute, as only 317 Punks have it. Similarly, CryptoPunk #7804 features a Cap Forward, which only 254 punks have. Lastly, it also has a Small Shade. As another rare trait, only 378 punks have this. Thus, with all these features, #7804 is an incredibly valuable NFT to hold. 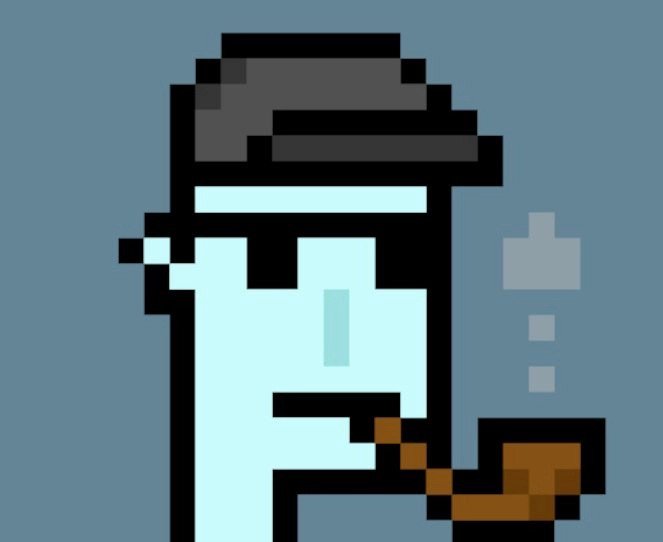 Top selling crypto artist, XCOPY needs no introduction. He is famous for his dystopian and death-themed artworks. The anonymous artist sold his “Right-click and Save As Guy” NFT artwork for a staggering $7 million. The NFT was purchased by none other than Cozomo de’ Medici, one of the most acclaimed collectors in the NFT space.

The NFT piece in itself is an iconic artwork in the industry. He named it ‘Right Click And Save As Guy’ as a joke given how several people believe that NFTs can be easily right-clicked and downloaded. Created on December 6, 2018, the piece was first sold for 1 ETH or about $90 at the time. It’s only been sold twice, the second time to de’ Medici.

Created by Canadian artist and coder, Dmitri Cherniak, Ringers is one of the most expensive NFT collections on the Art Blocks platform. The collection includes 1,000 generative art NFTs made up of “strings and pegs”. Currently, even the least expensive Ringer will cost you about $88,000.

Within the collection, Ringers #109 holds the record for the highest sold NFT. Moreover, it is the most expensive NFT on the Art Blocks platform, after it sold for $6.93 million last year.

When Beeple’s Crossroad sold for $6.6 million on Nifty Gateway in February 2021, it was the highest any NFT had sold for at the time. Besides, with NFTs not yet mainstream, such expensive sales were uncommon. However, by this time, Beeple had already become quite famous in the art space. Indeed, just two months before, he sold a series of NFTs for $3.5 million. This was just the beginning of bigger things to come.

Created in response to the 2020 US presidential election, Crossroads is a 10-second video with two outcomes. If Donald Trump won, it would show a victorious Trump. However, if he lost—which he did—the artwork would play a dispirited Trump.

Thus, the final piece shows a fallen, naked person (symbolic of Trump) lying on the streets as others pass by. Insults are also written all over the person’s body. Interestingly, the NFT sold before the election.

While this list talks about only ten of the most expensive NFTs ever sold, several others have sold for millions of dollars. Many of these include CryptoPunks and Beeple’s other artworks. Others are ‘All Time High in the City’ by XCOPY, Edward Snowden’s Stay Free, and Bored Ape #8817, to name a few. In the coming months, we can expect more NFTs to break the current records.

Reethu Ravi is a journalist currently based in the UK, covering environment, sustainability, tech and innovation. When not found between the pages of a book, she can be seen catching up on the latest developments in the tech world. A naval architect-turned-journalist, she loves bringing stories of change and innovation to the limelight.

A Guide to the Glitch Art Movement From Web2 to Web3

Who is Andr3w? Everything about NFT Influencer Andrew Wang

The Ultimate Guide To Paying NFT Taxes Around The World

Instagram NFTs: What It’s All About And Why You Should Care

NFT Christmas Gifts and Festive Mints For The Season

How To Promote Your NFT Collection: The Top Free and Paid Ways

The NFT Bubble Has Finally Burst, or Has It?

Are These NFT Twitter Accounts Liking Your Posts? It’s a scam!

Dookey Dash: How to Make a High Score on the BAYC Game